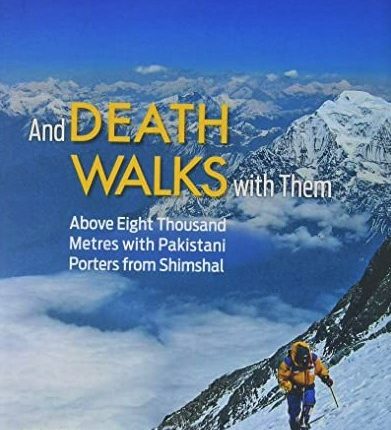 Christiane Fladlt who first came to Pakistan in 2002 writes exclusively about High Altitude Porters (HAPs) of village Shimshal (originally called Shingshal) in Hunza district. The book is divided into two sections. The first section sheds light on the people of Shimshal, their way of living, mountain climbing and their means of livelihoods. Information about all the eight thousand-meter peaks in Pakistan is also mentioned. This includes details such as altitude, first summit and level of difficult.

The second section focuses on the lives of high-altitude porters of Shimshal. Fladlt includes eighteen of them. Rajab Shah, the most prominent among them is also discussed in great detail. He holds the record of being the first in Pakistan to climb all of the five eight thousand-meter peaks in the country. Meherban Shah, Qurban Muhammad, Mohammad Ullah, Ali Musa, Jehan Baig and many others are also included in the book. Scanned photographs, certificates, recommendations and copies of other valuables of the climbers are also included in the book. The chapter on Hasil Shah is very interesting. Shah is referred as ‘high-altitude porter and businessman.’ His childhood, escape from the village and other aspects of his life are also discussed.

The writer has made some observations about the people of Shimshal and applauds the confidence of Shimshalis while walking. She says that ‘they almost seem to dance across obstacles with a dreamlike confidence that may be called instinct.’ Regrading her interviewees, she says that some of them exaggerated, others remained over excited while some others remained careful in answering questions. Fladlt notes that when she interviewed Daulat Amin (a teacher who took over teaching in 1966) in 2008 about the history of education in Shimshal, he kept quiet about his predecessor Ghulam Sultan (son of Yusuf Beg from Gulmit village). Other than that, for verification purposes the author compares the accounts of HAPs. In some of the cases the events and dates of the different interviewees did not match. Moreover, the author also compares the Sherpas of Nepal with HAPs from Shimshal, and finds the Sherpas earning better wages.

The author regrets that she could not include Shaheen Baig’s account in the book. She also mentions that she contacted Fazal Ali, Wahab Ali Shah and Sajjad Karim, but they were not interested in a chapter of their own. She made appointments with them, but they did not keep them. If there is any possibility for a new edition of this book, it could include stories of Abdul Joshi, Mirza Ali, Samina Baig and other recent climbers from Shimshal.

In this book the author has made a serious effort in documenting the achievements of the climbers and wants their achievements to be recognized. Fladlt is well aware that these unsung heroes are poorly paid. The author suggests that as long as the government, media and the tour companies do not provide support climbing will serve a limited role in Shimshal because there are other less hazardous jobs available.