A hasty plan landed us in Deosai on the morning of Saturday. We planned it out on text messages and decided we will be travelling to Bari La in Deosai. ‘La’ is a Balti word for mountain pass and Bari La is a historic pass that connects Skardu to Shingo Shigar. 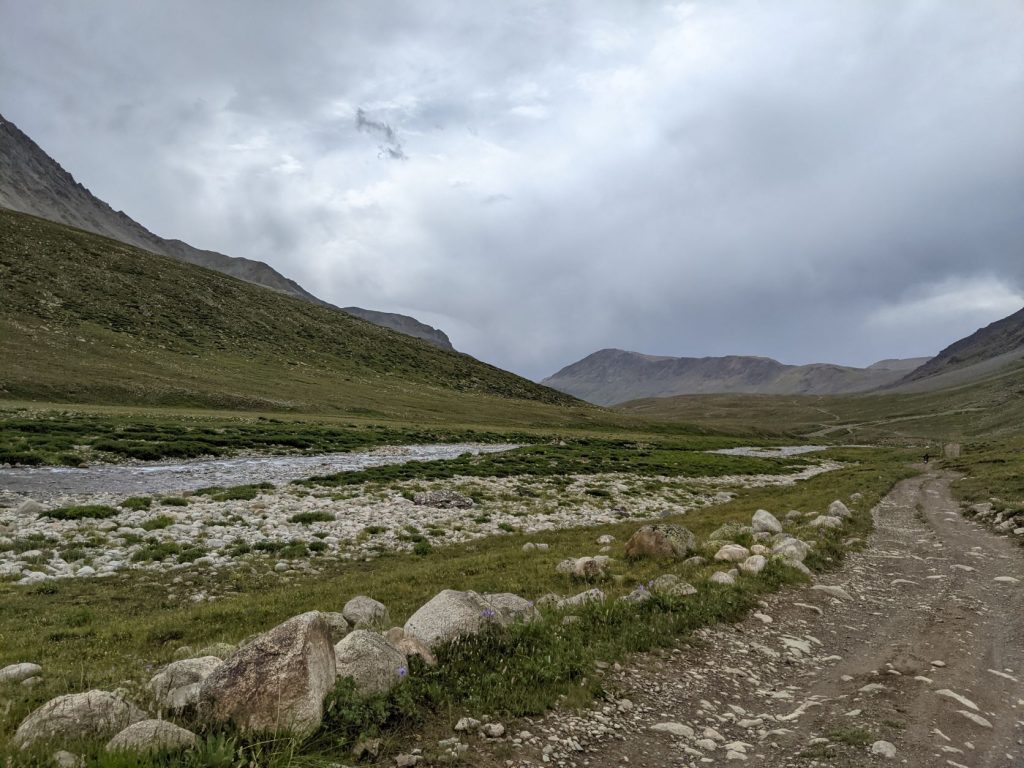 As you enter Deosai and cover the traverse of Ali Malik Top, you travel further ahead covering meandered dirt roads to reach this crossroad marked by a signage, “GB-PWD Bari La” with distances to the different villages of Gultari. Sheosar is the go-to destination for tourists and on the way, many a Toyota TZ’s zipped along. We were on their tail, and they threw up clouds of dust blocking our view and coating our bodies with a thick layer of Deosai’s fine dust particles. We twirled the throttle of our bikes and soon we overtook them, and we swerved to the left taking the Bari La road. The road here is a regular zigzag as if trailed by an enormous reptile crawling over the place.

We took the path less travelled. We were on a gutted dirt road which made the suspension of our bikes to dace to its tunes. The tyres squirting out pebbles which ricochet against the chamber of the bike. Occasionally, a Himalayan marmot would cross the road, maybe to take refuge in its furrow seeing us aliens trespassing their territories. Deosai lacks features of a proper valley by the virtue of it being a plateau, all the same it carries some other features where the bluffs appear quite often sending down streams giving life to the many life forms below. We were however gutted to encounter these streams which are the lifeline of Deosai – as it was anathema to fulfilling our travel ambitions. It played havoc with the suspension of our bikes and our bikes would stutter when they reach these intermittent streams flooding the gutted roads at many different points.

We persevered and soon reached the ‘Lhas’ (livestock shed at summer pasture) managed by the community of Katisho Kharmang. We were dehydrated and lurched towards the spring which was some paces down the ‘Katisho Lhas’. We cupped our hands to catch water and gulped it down till it quenched our thirst. After exchanging greetings with the shepherds, one of them was kind enough to offer us ‘lassi’ (buttermilk). We went inside one of the stone houses they had built accepting their invitation. It is one of the humblest houses you would ever come across on the face of the earth! But those who inhabit these spaces are one of the most generous of the people. Climate change has impacted even these farthest recesses and they lament over this condition – obviously unaware of the causes and what the coming years have in store for them. We conversed for a while and bid adieu to them as the journey ahead was more demanding.

Our next stop was Bari La. The natural watershed draws the boundaries of Deosai and Shingo Shigar. Shingo Shigar holds an important historical value as it is one of the routes used by caravans and invading armies to Baltistan. It is said that in 1841 when Zorawar Singh died, the deposed ruler of Skardu Raja Ahmed Shah led an uprising. The rulers from different fiefs of Baltistan joined hands to arrest and imprison, Bhawgwan Singh, the Dogra Thanedar of Skardu. In order to quell this uprising, Gulab Singh, the Maharaja of Kashmir, sent a well equipped force of 3000 under the leadership of Wazir Lakhpat of Kishtwar. He reached Kargil and crossing Dras river reached Baltistan through Shingo Shigar. He might have used this same route as we were on. He marched on Baltistan after a brief skirmish in Shingo Shigar and quelled the uprising. He arrested all the local rajas and brunt down the Kharpoche Fort, as well; many noble men of Baltistan were hanged on his orders. 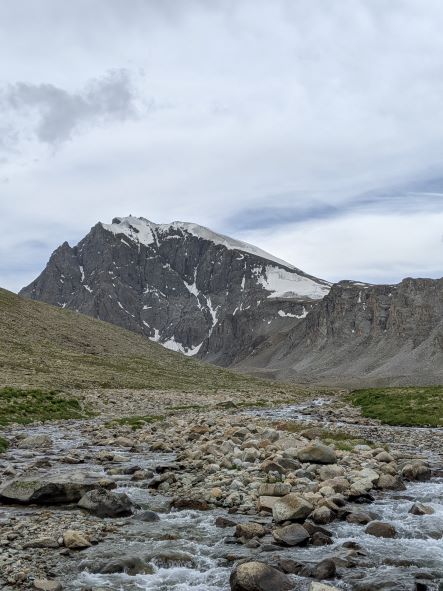 Bari La is mysterious in many ways. These passes were terrifying places claiming countless lives. Dark clouds almost always hover around here. As we entered its vicinity, we were met by a heavy downpour. Our bikes started slipping and the occasional stream crossing had left us soaked in water which send chills down our spines as it combined with the bone chilling winds. We had collected twigs and cow dung on our way and we hid ourselves inside an overhanging rock by the roadside. We made tea here. To our dismay, the rain turned into sleet and soon our little cover started dripping water. The raging wind killed the fire. We kept trying and eventually successfully made fire. Juniper leaves came in handy as it readily catches fire. Tea goes well with donut and kulcha, especially when you are stranded in such a forlorn place. We lived the moment to the fullest and enjoyed every sip of tea we took. 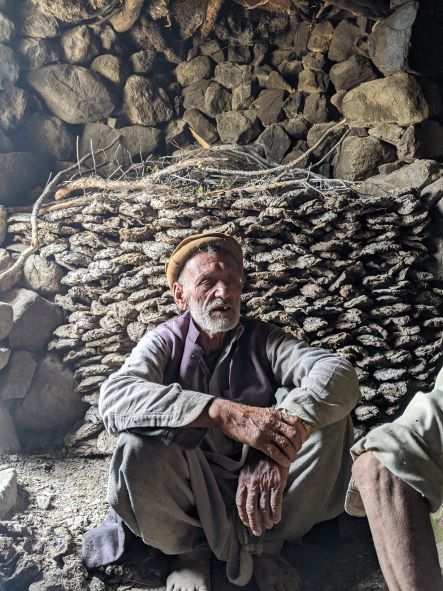 They say Bari La is an abode of the apparitions and the fairies who block access of anyone who is new to the place. Might be the way of thwarting our transgression, the hailstorm continued with a whooshing moan of air. It is a godforsaken place without a trace of any living being in kilometers of its radius. There are many instances of paranormal activities happening around here. One of our friends with his family once had to spend the night here and he barely made it back alive. He recounted a horrific encounter with supernatural being who beckoned them taking human shape (doppelganger) of one of the family members. They timely sensed abnormality in the shape of the doppelganger and reject her offer which saved the family.

When the hailstorm stopped, it was already 3 p.m. We moved a little ahead and reached this bridge over Shatong nullah. Bari La was in sight and we were in the land of the dead. We were in a bind as to whether travel ahead and make it to the top of the La or return from here. I insisted on going ahead and reaching the La itself but better sense prevailed and we thought better of it.

Thankfully, we just safely made it back to Skardu without encountering any apparitions, before the dark! 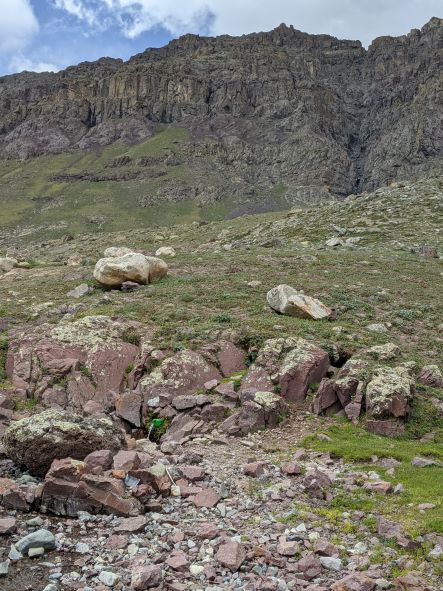 Kaleem Ullah is a Skardu based development professional associated with an INGO. His interests include history, literature and indigineous cultures of the mountain communities.