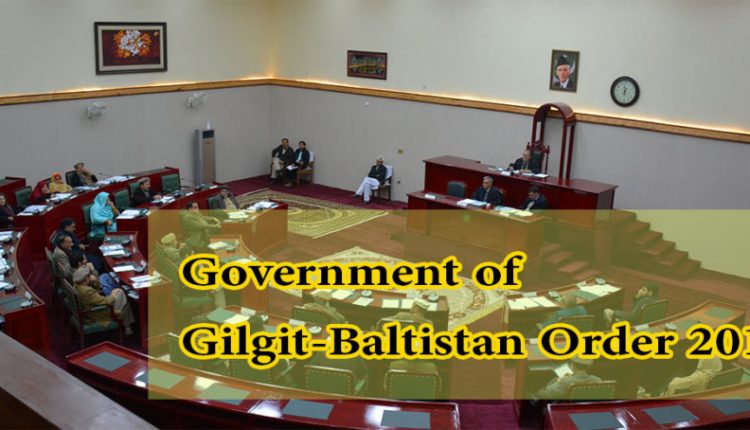 The name of Gilgit-Baltistan in Pakistan evokes aesthetic feelings about the land with serenity, gushing rivers, flora and fauna, lofty mountains, glaciers and azure lakes perched in the lap of one of the biggest massifs in the world. What is missing in this process of aesthetics is the human element. Psychologically human beings try to evade disquieting feelings by indulging in beauty. However, like the Keatsian ideal it is not necessary for the beauty to be truth. Sometimes the truth of human condition can be ugly.

Gilgit-Baltistan is one of the regions in Pakistan where the collective truth about its political identity mars the beauty of landscape. Owing to the perpetual darkness on the firmament of politics, the social psychology, literature, politics, religion, education and culture in Gilgit-Baltistan have developed attributes typical of nocturnal being. This bleak picture is the result of apathetic governance structure, and colonization of the life world by administrative approach. A study of colonial and post-colonial period clearly shows gradual gnawing of the power and identity of people to cater to administrative necessities at the cost of popular aspirations.

Owing to the monopoly of administrative and strategic dimensions in the thinking of policy and decision makers, the political dimension is made to play second fiddle to dictates and necessities of power. That is why the state has been experimenting with different systems in Gilgit-Baltistan to avoid the core issue of granting constitutional rights to the region. As a result, the political and administrative apparatus has to readjust itself to ad hoc realities manufactured by the federal government for the local people. Although the region of Gilgit-Baltistan remains invisible on the debates and issues in the rest of Pakistan, it has suddenly appeared on the limelight of media and political discourse after the announcement of the Government of Gilgit-Baltistan Order in May 2018.

Like previous systems of governance, the newly announced package is also thrust upon local people through the order without any constitutional cover and consultative process. Such a system remains vulnerable to vagaries of power in the centre. Thus, it fails to provide durable solution to lingering issue of political empowerment o of Gilgit-Baltistan. The incumbent government of Gilgit-Baltistan claims that the package has conferred equal status to the people of region as enjoyed by the citizens of other provinces in Pakistan. This claim is far from the truth, as the new order does not provide any citizenship status to people in Gilgit-Baltistan. Instead of granting citizenship under constitution, the order intrudes into the region by extending Pakistan Citizenship Act 1951 (II of 1951), which allows a person with citizenship of Pakistan to become resident of Gilgit-Baltistan.

It defies all the reasons as to why the government of Pakistan has decided to make the citizens with representation in the National Assembly and Senate residents of the region that is still seeking representation at national level. Such a clause in the order will open the floodgates for migration of people from other provinces to the region, which has barely a population of 1.5 million. In the long run it has dire implications for the region’s sectarian, ethnic, linguistic and cultural composition. There is a method to such mad decision. It is reported in print media that the Kashmiri lobby opposed full empowerment of Gilgit-Baltistan because it would harm Kashmir cause. That is why government of Pakistan has refrained from extending constitutional rights to Gilgit-Baltistan. So it was deemed necessary to keep local people of the region under the thumb of federal government till the emancipation of Kashmir.

Other articles in the Gilgit-Baltistan Order 2018 also lend credence to the view that the package has disempowered more than empowering the region. The package was introduced in the heels of increasing agitation against the decision of government to impose taxes and confiscation of communal land in Gilgit-Baltistan.  In most of the valleys in Gilgit-Baltistan, land related issues are still managed through customary laws. These rules are the product of practices and customs evolved over the centuries within particular cultural ethos, and political and social structure in Gilgit-Baltistan. Traditionally, local rulers and tribal councils were guardians of customary laws.  It is only in the modern period that the region witnessed introduction of statuary laws but their implementation remained confined to settled lands. Unlike modern statuary systems emanating from centralized planning, the traditional mechanism of enacting and promulgation of laws was participatory.

The issue of empowerment of Gilgit-Baltistan’s is basically an issue of human rights for it is violation of basic rights to deny people of their basic political and social rights. Instead of ameliorating the human rights situation in Gilgit-Baltistan, the new order provides more space for violating human rights. Ideally state should make institutional and legal arrangements to ensure safety and security of its citizens. Instead, the state cramps space of citizenry and civil society by empowering administration in Gilgit-Baltistan to take a person in custody for 3 months by declaring him, “prejudicial to the integrity, security or defence Pakistan.” The manifestations of such powers have become visible since the announcement of the order whereby administrative authorities have started to act like viceroy in matter related to public amenities and land issues.

Interestingly, the new order makes those in rule immune from accountability before any court. Article 108 states, “The Prime Minister, the Governor, the Chief Minister, and Ministers shall not be answerable to any court for the  exercise  of  powers  and performance  of functions of their respective offices  or for  any  act  done  or  purported  to be done in the exercise of those powers and performance of those functions”. In other words, the kangaroo courts will only be used to prosecute common people who are not in power. Seen in this way the order turns the citizen into orderly within the system. Fed up of such an alien and apathetic system, Jan Ali, the popular poet of Shina language, predicted almost four decades ago that, “nay kaghaz ga khero waey, to nay adalat ga khero waey – a time will come when the paper of order will come from outside, and courts will be established by the alien system.”

The only good point in the new package is establishment of the Gilgit-Baltistan Consolidated Fund. It may help in assuaging the difficulties entailed in the previous system wherein the regional government had to wait for periodical release of funds from the centre. Also, the order does not give any representation to Gilgit-Baltistan in finance managing and distribution bodies like Indus River System Authority (IRSA) and National Finance Commission (NFC) and the Council of Common Interest (CCI).

The Gilgit-Baltistan Order 2018 starts with the claim “Whereas it is expedient to provide for greater empowerment so as to bring Gilgit-Baltistan at par with other provinces and to initiate necessary legislative, executive and judicial reforms for the aforesaid purposes.” It encapsulates the history of seven decades wherein Gilgit-Baltistan has been kept in perpetual limbo so that it cannot remain what it was and not become what it wants. In the region of dark limbo not light of hope can penetrate. The only thing that can nourish in the dark zone is bitterness and resentment.

Gilgit-Baltistan Order 2018 administers administrative medicine for a chronic political malady that has started festering other organs of the state and society. The new administrative package is disempowering and non-starter because it focuses on symptoms at the expense of causes which are deep. The simmering lava of resentment in the deep political unconsciousness of people cannot be contained for long term by imposing a thin administrative crust, which saps trust of people from state and robs system of legitimacy in local political setting.

The writer is a researcher with background in philosophy and social science. Email: azizalidad@gmail.com

Kohistan: a life in dire straits