Negotiating pluralism and promoting a culture of continued dialogues between all the communities, civil society and between the state and its citizens essential for prosperous and peaceful Pakistan: speakers at a seminar in Kalam Swat reiterated

Given the burgeoning challenges today’s societies, especially one like of Pakistan, faces in the shape of growing security concerns, national harmony, the un-ending national building project and the strict measures associated to making a ‘homogenous’ nation it becomes imperative to understand pluralism by negotiating it on all the levels of our polity so as to ensure a much prosperous and developed Pakistan. Pakistan is a diverse society in the form of ethnicities, races, religions and ideologies. Managing this diversity and celebrating it can reduce many of the ills we have been facing. When the so called West especially the USA faced new challenges ushered by industrialisation, urbanisation and influx of people with heterogeneous cultural, racial, and religious backgrounds in the late 19th century the thinkers began to spend their energies to understand and guide the society on these new social phenomena.  These changes generated host of complex issues and added diversity to the growing society of America. William James called it pluralism which is “a state of society in which members of diverse social groups develop their traditional cultures or special interests within a common civilisation.” 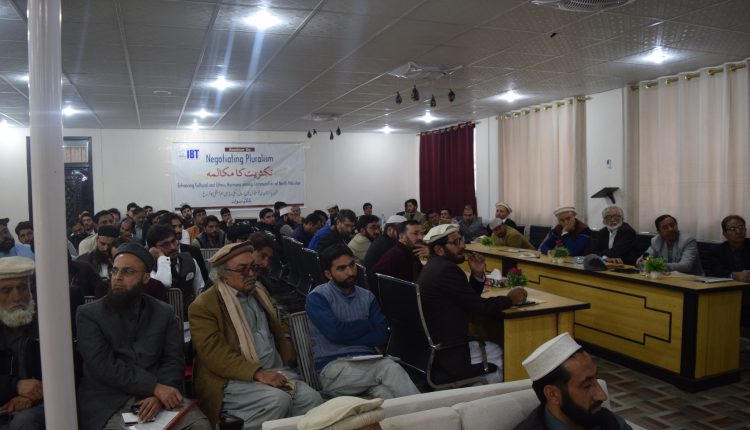 The naturally beautiful North of Pakistan is equally beautiful with cultural diversity and presents an attractive bouquet of diverse cultures, languages and ethnicities. To celebrate and protect this diversity so as to achieve the overarching goal of transforming these marginalized groups into sustainable communities Idara Baraye Taleem-o-Taraqi (IBT), a Swat based civil society organization and research institute, has launched an initiative wherein dialogues among the communities of northern Pakistan are held so that they may understand and negotiate ethnic, cultural and religious pluralism of each other and consequently add to the efforts of making Pakistan a prosperous, conducive and developed country. In this regard the said organization organized a one-day seminar in the scenic town of Kalam in Swat which was participated by a large number or representatives of more than 30 communities living in the north.  The participants were teachers, researchers, academics, language and culture activists, religious leaders, social activists and local scholars from Gigit-Baltistan, Chitral, Swat, Kohistan, Peshawar and Islamabad.

The key speakers for the seminars were Muhammad Amir Rana, head of Institute for Peace Studies (PIPS) Islamabad, Dr. Khadim Hussain, head of Baacha Khan Trust Education Foundation (BKTEF), The University of Sydney professor and linguist Dr. Ahmar Mahboob and prominent writer and journalist Sabookh Syed. Mr. Amir Rana emphasized the need of continued dialogue among all sections of the society with empathy, respect and appreciation of the diversity Pakistan is bestowed with. He stressed that the various ‘opposing’ groups who are deemed ideologically juxtaposed to each other are also ready to speak to each other and negotiate the diversity but it seems they have deliberately been left to widen the gap they have. In his lecture Mr. Rana engaged the youth in a dialogue and virtually presented them how to get engaged in such lofty undertakings.

Dr. Khadim Hussain said on the occasion, “For a genuine pluralistic society we need to change the very vocabulary of social interaction and socialization because it is the discourse patterns and language that can consciously or unconsciously certain mindsets among the society”. He further elaborated saying, “The language of very social conversation is shorn off a pluralistic approach. We define many or our social relationships and interplay by a language that is used in warlike situation. This need to be reversed and for that we need to redefine our education”.

Dr. Ahmar Mahboob, who is interested in a field of linguistics which he calls ‘subaltern linguistics’ told the audience that our education needs to be decolonized and we need to design a new pedagogy so as to celebrate our diversity in terms of languages, ethnicities, religious sects and power dynamics. “Our Boli is not a ‘language’. Our mother tongues used to be building human relationships and we had our own traditions that were cohesive rather than disintegrating but that was colonized we were stripped of our roots; and consequently we have been having fragmented social fabrics’. Dr.  Ahmar further said

Sabooq Syed evaluated the role of religion and media whether they add to the efforts to bring pluralism or dismantling it. He cited many verses from the Holdy Quran and said, “Islam is a religion supporting diversity within and outside it. The various schools of thought in Islam is actually its strength but anxieties of modernity have produced ‘religious personalities’ who imagine others in their own image and thus impose a suffocating homogeneity’.

Highlighting the issues with our media, Sabooq explained that their always interests lie everywhere. The Media houses do what they find interested and more attractive, they also follow the direction of PEMRA and other agencies. He decried the role of social media in curbing opposite voices or bashing people for their different views. He also stated that social media has also exposed the youth to new challenges and their credulous minds have reinforced the propaganda machinery for the usurpers of power in Pakistan. He also told the youth that social media has also brought many positive changes and the youth are gradually getting aware of the perils of being played in the hands of the propagandists. According to Mr. Syed social media has also challenged the power dynamics and has pressured the governments all around the world to be on track.

The participants unanimously agreed to have a strong networking in the future and stressed on more connectivity and people to people contact among the different ethnic communities in northern Pakistan. They also reiterated that a common platform in the shape of Mountains Communities Collective (MCC) will bring the communities closer to resolve their issues and future course of action.

IBT is thankful to all the people, volunteers, speakers, researchers, students and the communities in whole northern Pakistan for their continuous support in helping these seminars happen.

and certificates to the keynote speakers of the series of the Seminars in North Pakistan.

Zubair Torwali, head of IBT, presented an overview of all the seminars and some future action points which include a research journal on the northern Pakistan, establishment of a research and training center and continuation of the seminars under the platforms of IBT and the Mountain Communities Collective (MCC), a network of all the ethnic and cultural communities of northern Pakistan.

Pashtuns and Gandhara: on Pashtun-Afghan ethnogenesis

Unique Tales from the Shandur Pass

Bashgal and the Kalasha under Katoor Rule

Book Review: Etherton at Kashgar: Rhetoric or Reality in the History of the “Great…