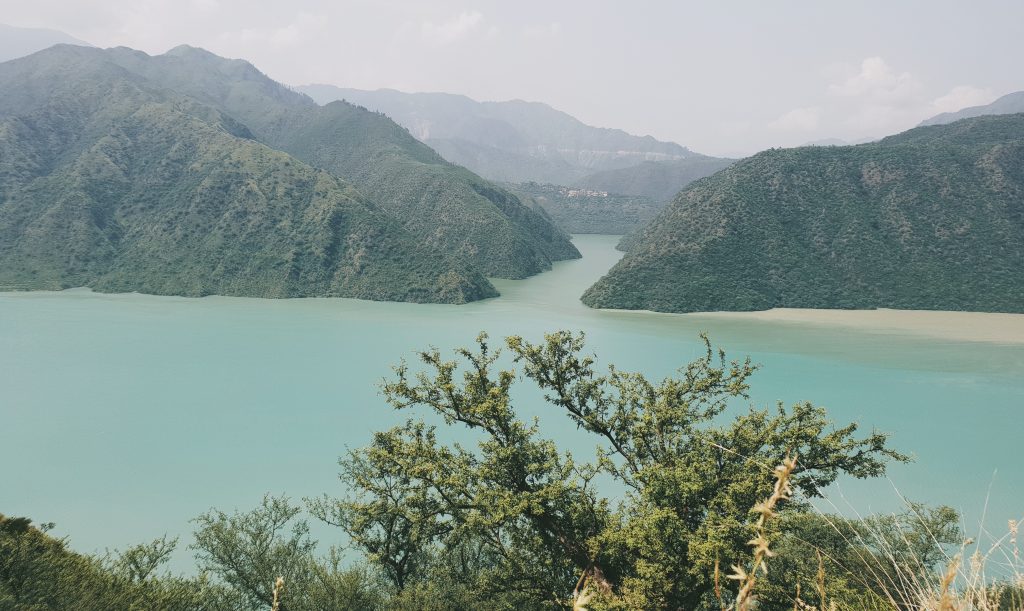 The abandoned shrine was concealed behind a mass of thorny bushes across the Indus from Pakistan’s smallest district, Torghar. None of the curious villagers who accompanied me on the ferry trip knew who Akhund Salaak Kabalgrami was. An elderly gentleman had faint memories of his grandparents allocating a portion of their annual harvests to the saint’s progeny. “Schools here don’t teach local history, and there have been too many conflicts within living memory for anyone to take interest in wars that took place centuries ago,” he remarked.

I found the use of visual imagery on tombstones to indicate the gender of the deceased buried in Akhund Salaak’s shrine complex to be fascinating. Women’s graves could be identified through the inscription of shoes on the tombstones, and men’s graves by swords and guns. I have observed this obscure art tradition in old graveyards across Khyber Pakhtunkhwa’s trans Indus Tanawal, Gadoon-Amazai, Torghar and Shangla regions.

According to locals, the seventeenth century structure was abandoned about fifteen years ago when one of the saint’s living descendants, Maulana Waliullah Kabalgrami, outlawed visits to Sufi shrines after joining the Tehrik-e-Taliban Pakistan (TTP) as a teacher of TTP’s infamous Mullah Fazlullah.

My quest to search for Akhund Salaak’s elusive legacy started last summer, when I was conducting research on the conflict that took place between the Mughal Empire and various tribes inhabiting the modern-day Khyber Pakhtunkhwa region in the seventeenth century. Born as Akbar Shah towards the end of the sixteenth century, Akhund Salaak rose through the ranks of Khyber Pakhtunkhwa’s Chishtiya Sabriya Sufis. In Akhund Salaak’s day, Khyber Pakhtunkhwa’s Chishti Sufis were bitterly divided between those who supported and opposed the Mughal empire. Whereas the Chishtiya Sabriya were sympathetic to tribal chieftains resisting Emperor Aurangzeb Alamgir’s rule, the Chishtiya Nizami Sufis (best represented by Pir Baba and Akhund Darveza) were in the pro-Mughal camp.

After completing his education, Akhund Salaak received a horse and dagger as a farewell gift from his Sufi master, Akhund Panju Baba of Nowshera, and set off towards a life of military conquest in the mountains of northern Khyber Pakhtunkhwa. Akhund Salaak’s crafty diplomatic skills, combined with the prestige commanded by his spiritual background, allowed him to influence several tribal chiefs to set aside their petty differences and challenge Mughal interests in the region. He allied himself to Bahaku Khan, an enterprising young chieftain of the Khadokhel branch of the Yusufzai tribe. According to the historian Allah Baksh Yusufi, “Excited by the spirit of jihad, the tribes of the region flocked to Akhund Salaak’s banner in large numbers.”

Akhund Salaak’s Machiavellian instincts and ability to mobilize large numbers of tribesmen to fight against the Mughal Empire earned him the name of “Mullah Chalaak”—the cunning cleric—at Aurangzeb Alamgir’s court. The Mughal territories nearest to Akhund Salaak were located east of the river Indus. They were administered by the Rajas of Pakhli Sarkar near Mansehra, who were powerful local vassals of the Mughal empire. Akhund Salaak met with and convinced two chiefs belonging to rival factions of the Tanoli tribe, Mimara Khan Palal and Chaara Khan Hindwal [i], to successfully attack and recover the territories they had lost to the Mughals in the Lalogalli-Tanawal region of Hazara. In 1667, Akhund Salaak further weakened Mughal rule in the region when he masterminded an assault on the Mughal fort at Chanchal (in District Battagram) through Bahaku Khan Yusufzai. An interesting passage from the Maasir-e-Alamgiri, an account of the reign of Aurangzeb Alamgir, refers to “the disturbances caused by the deceitful imposter the wicked Mullah Chalaak, and the leadership of the black faced Bahaku”.

Learning about Muslim tribesmen from Pakistan’s northwestern regions waging war on none other than Aurangzeb Alamgir, most conservative of the Mughal Emperors, could complicate history lessons in both Pakistan and India today. After comparing evidence from the Mughal empire’s contemporary records with tribal history sources, it appeared to me that Akhund Salaak’s armed struggle was not more than a localized rebellion in the Mughal empire’s peripheries.

Far less historical information is available for scholars who wish to study Akhund Salaak’s zealous lifelong commitment to increasing religious conversions in the remotest of regions in northern Khyber Pakhtunkhwa.

History, oral traditions and folklore in Torghar indicate that towards the mid-1600s, Akhund Salaak found his ambitions forcefully checked by Badshah Doma, an obscure character who happened to be the last of northern Pakistan’s powerful Dardic kings who practiced an indigenous animistic faith that predated Islam in the region.

King Doma was the last in line of an ancient dynasty that ruled over the present district of Torghar until the reign of the Mughal Emperor Shah Jehan (1628-1658). According to the Pashtun historian Khan Roshan Khan, “So powerful was Doma that the Yusufzais could only face him in battle after they had conquered Mardan and Swat. Akhund Salaak and Bahaku Khan Yusufzai partnered to defeat Doma.” In the war that ensued, King Doma put up a fierce resistance and fought to his death. After Doma’s death, his Queen (named Shandayi) was forcibly converted to Islam and wed to Bahaku Khan Yusufzai.

Doma’s memory lives on in Torghar’s remote villages through traditions and folklore. When I spoke with older people, I was told that until the 1970s elders belonging to each of Torghar’s five clans conducted jirga (tribal dispute resolution) meetings on a large rock by the Indus that was known as Domamo Gat (Doma’s Rock). The building of a dam at Tarbela increased water levels in the Indus and submerged the rock. According to Torghar’s oral history traditions, King Doma spent his summers on a mountain in Buner and winters in the warm Palosa region of Torghar. A narrow ravine in Torghar known today as “Doma Khwar” marks the location where Akhund Salaak and his allied tribesmen slayed King Doma.

An odd myth that persists among descendants of Torghar’s Pashtun settlers is that Doma’s blood resembled the colour of egg yolk. Dehumanizing Torghar’s previous ruler through folklore might have helped early generations of settlers justify their claims to legitimate ownership of the region. Whereas the subcontinent’s rich folk stories can inspire children and adults alike to become imaginative and curious, in some cases they can also fuel discriminatory stereotypes that justify the repression of minorities and lower castes.

With Torghar acquired and resettled, Akhund Salaak’s next project would be the religious conversion of the remaining non-Muslim Dardic communities in the inaccessible haunts of Indus, Swat and Dir Kohistan. A lack of documented historical information makes it hard to ascertain whether the religious conversions took place voluntarily or by force. In his book “Dir Kohistan – Aik Mukhtasar Taaruf” (A Brief Introduction to Dir Kohistan), the local scholar Dr. Hazrat Bilal interviewed elders in Dir Kohistan who claimed that in 1644 their ancestors voluntarily invited Akhund Salaak to convert their communities to Islam. Imran Khan Azad, a young history researcher from Dir Kohistan contradicts these claims. According to Azad’s research, Akhund Salaak spearheaded a military assault on the region and, after defeating a large number of Kohistanis at a battle that took place at Batot in Upper Dir, he only spared those among survivors who converted to Islam. The last pockets of Dir Kohistan’s independent Dardic communities held out till the early twentieth century, when their territories were forcibly acquired by Dir, a princely state in British India. According to the American Anthropologist R. Lincoln Keiser “armed with slings and ancient matchlocks they (the Kohistanis) could not stand before the modern rifles of Umra Khan’s forces – rifles purchased with British consent in India.”

Both Torghar and Kohistan rank near the bottom of Pakistan’s Human Development Index. At a gathering last summer, I was amused to hear a tour operator describe the scenic region as an excellent adventure travel destination that is ‘stuck in the seventeenth century’. In the 1980s, the German anthropologist Johannes Fabian termed it as “the denial of coevalness,” the tendency to deny that you occupy the same time as someone else. The denial of coevalness prevents us from seeing that the lives of those residing in Kohistan are not trapped in time, but are lived out in a twenty first century world that has been shaped by political policies as well as patterns of conquest, forced migration and resettlement that were directed towards Khyber Pakhtunkhwa’s Dardic communities over the centuries. Akhund Salaak Kabalgrami’s complex legacy deserves a chapter in any “people’s history” that examines the legacy of Mughal rule in the northwest, and sheds lights on Khyber Pakhtunkhwa’s past from the perspective of its ethnic and religious minorities.

[i] Ancestor of the author

Jahandad Khan is a young researcher and scholar on the Sikh heritage in Pakistan. He is founder of the Indus Heritage Club.

Book Review: Etherton at Kashgar: Rhetoric or Reality in the History of the “Great Game”.

Book Review: Etherton at Kashgar: Rhetoric or Reality in the History of the “Great…

The unmaking of paradise: Literacy as Trojan Horse – Part III

In the Battle Against Coronavirus, Humanity Lacks Leadership—–by Yuval…

Book Review: Etherton at Kashgar: Rhetoric or Reality in the History of the “Great Game”.

The unmaking of paradise: Literacy as Trojan Horse – Part III