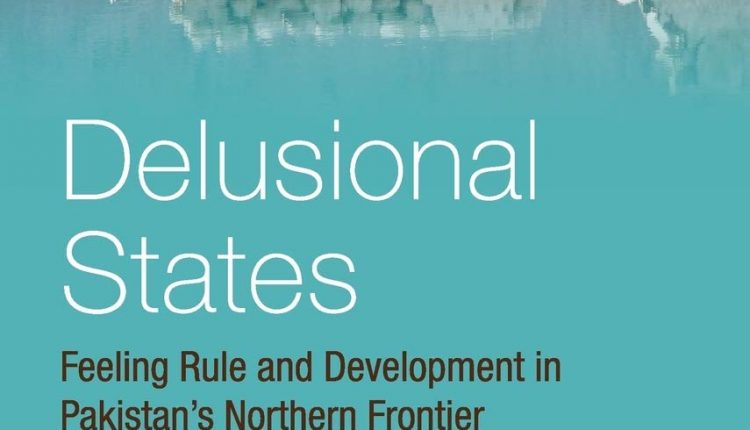 The very subtitle of book “Delusional States: Feeling Rule and Development in Pakistan’s Northern Frontier”, points towards a new way of exploring a particular political issue from the perspective of sociology of feelings. Nosheen Ali’s book is an excellent addition to ever increasing academic research about socio-politics of Gilgit-Baltistan for it looks at the convoluted and anomalous phenomenon of political liminality. Nosheen examines the political order through interdisciplinary lens buttressed by ethnographic studies within the communities that inhabit the “zone of non-being” – Gilgit-Baltistan.

The word states in the title connotes to ever mutating states of the denizens of Gilgit-Baltistan in tandem with apathetic policies of Pakistan. By employing the words like frontier to refer to the region under study, the writer tries to remind the reader about structural remnants of colonial rule in post-colonial governance of Gilgit-Baltistan. According to the writer, the perspective of viewing a given geographical area sans inhabitants tends to exoticise the region at the expense of human dimension. It is this gaze that represents Gilgit-Baltistan externally “as an idyllic destination” on the one hand, and “internally managed as a suspect security zone” on the other. When a security zone is grafted onto the zone of non-being, a terrible beauty is born wherein the region becomes aesthetically paradise but turns into political purgatory. The six chapters in three parts of the book captures feelings of the people living in a state of limbo.

The political economy of feelings in Gilgit-Baltistan is not created by exclusionary political set up only, but also by controlled mode of structural inclusion. For example, a large number of people in the service of armed forces and government of Pakistan helps creating loyal subjects. Nosheen Ali examines the processes, practices and structures of the state to unravel the technologies employed by the power to create “unimagined communities in the eco-body of the nation.” One of her fortes is the clarity of framework of analysis, and culling examples from field to support her argument. The insights of James Scott’s pioneering work “Seeing Like a State” provides the book a cue to examine how border territory is constructed by the Pakistani state, and its mechanisms of control through textbooks, maps and census. Demographic features are controlled to manage populace and create eco-body in the space called Gilgit-Baltistan Interestingly, till now the state has not made the data of 2017 census about Gilgit-Baltistan public.

Gilgit-Baltistan’s liminal status has given birth to an idiosyncrasy typical to it. One cannot label or explain the region’s state through an all-encompassing discursive construct. The region is a heart that defies clear cut academic categories, and harbours multiple thoughts and feelings at the same time. Therefore, it is not uncommon to see people identifying themselves with multiple categories, which sometimes combine opposing ideologies and identities. That is why we witness reiterated claims of loyalty at public spaces and events, suspicion in the shape of cursing in private spheres and then incessant allusion to sacrifices given to Pakistan in the wars. In the mixed political economy of feelings, the state deploys contingents of human resources, an array of institutions and financial resources to dispel suspicion in its subjugated subjects. However, instead of allaying suspicion and mainstreaming in the society, such tactics strengthens the political economy of suspicion and politics of suspicion. Nosheen particularly refers to diffused form of intelligence network in Gilgit-Baltistan. It is this purportedly diffused intelligence network that has sustained the sociology of suspicion as in GB. The cumulative result appears in the shape of suspicious subject not citizenry of the state.

The book subtly captures altercation between sectarian imaginaries and poetry in public spheres. For more than four decades, the region of Gilgit-Baltistan especially Gilgit has suffered from the scourge of sectarianism. With the increasing dominance of sectarian identity, the culture and other domains of life have been pushed into margins. The new sectarian narrative is countered through the popular medium of poetry. Nosheen Ali’s book solely focuses on the works of an organisation Halqa-e-Arbab-e-Zauq Gilgit (Halqa) in countering the sectarian narrative. Although her analysis of poetics of Halqa vis-à-vis sectraisnism is subtle, she tends to over emphasis the impact of poetic output of Halqa in Urdu on sectarian ridden society.

For a lay man or woman of Gilgit-Baltistani, Urdu is as exogenous as English. People in the region, especially language activists, are of the view Urdu as state language that marginalises local languages. Being an anthropologist, Nosheen would have been better, had she consulted poetics of a local language like Shina that offers rich poetry opposing religion in the harshest terms. Also, the oral literature in local language defines existential condition of people in indigenous metaphors. Explicating local feelings in alien language of Urdu is one of the flaws in the book. It is through Urdu language, the sectarian discourse is imported from the religious and ideological centres situated in the southern part of the country. The controversy regarding textbook of Islamiat in 2000s in Gilgit-Baltistan bears testimony to how Urdu has become a potent ideological tool for fostering sectarian imaginaries.

Nosheen in her book poetically declares that the history of all hitherto existing society is of the history of class struggles, but of love struggles. The book enumerates a litany of love heroes and heroines from Heer Rnajha, Mirza Sahiban, Laila Majun, Sassi Punnu and Shirin Farhad to Sohni Sahiban, but fails to provide any local legend of love from Gilgit-Baltistan. One such legend is the legend of Yurmas Malang Jan.

Despite, afore stated shortcomings, the book clearly shows the acts, performances and process how culture becomes a tool to counter sectarianism. Nosheen rightfully highlights performance of culture in mushahiras, sports, music and dance. Seen in this way, culture in Gilgit-Baltistan seems to be a medium that releases the self from the suffocating sectarian atmosphere of Gilgit-Baltistan. Nosheen is at her best in her reading of opposition to school textbook of Islamiat by Twelver Shia leadership because of its Sunite content. Nosheen terms the resistance of Shias to the content of religious textbook as secularizing force because it is a religious group that opposes imposition of a certain version of Islam by the state on religious plural society. So, it can be said that struggle of a religious group against the imposition of a certain version of religion by the state creates secular space.

The book “Delusional States” provides different reading regarding the nature of development and environmental interventions. Nosheen takes the Khunjerab National Park as a case study and provides new perspective on the exclusionary narrative created by the experts and practitioners of environmental protection. Contemporary knowledge about environment and its interface with local communities is generated and made respectively by local practitioners, national decision and policy makers, and international experts. This regime of knowledge is inclined to legitimise certain way of seeing things, while rejecting indigenous knowledge as a threat local habitat. It treats local populace as threat to nature. Therefore, it is important to save local flora and fauna from local people. To protect nature from people, the idea of exclusive zone in the shape of national parks is proposed. The book provides us cue to conceptualise the contemporary discourse of environmental protection and politics of national parks in Gilgit-Baltistan in new ways.

Overall, the book succeeds to explore feelings generated among the masses of Gilgit-Baltistan by an apathetic rule and political policy of the state. This policy has begotten delusions of power and control over the region. When the objective world is ruled by indifference, then indulging in subjectivity enables one to make sense of the world outside by daubing it in the subjective hues. The writer unravels the latent feelings of populace through emic view gained from ethnographic research.  Although the book is an academic one, the diction of writer is exquisite and poetical. It is a treat to read in depth analysis of socio-politics of Gilgit-Baltistan in a language full of poetical cadence and allusions. Delusional States is a must-read book for the researchers interested in sociology of feelings and its manifestation in the region of non-being – Gilgit-Baltistan.

Hargin: A Mythical Creature of Gilgit