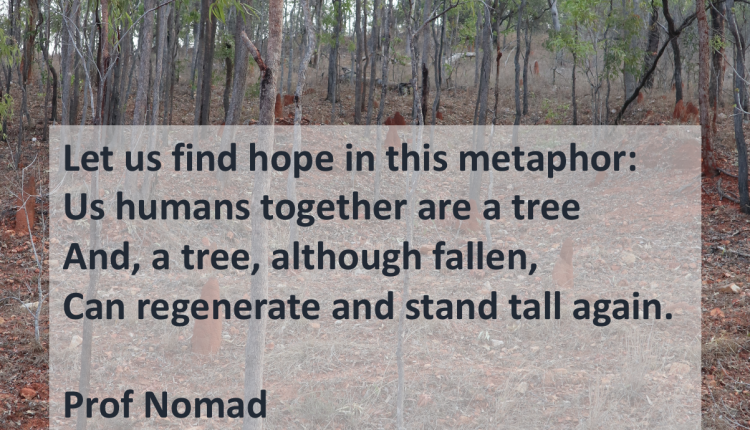 Why is it that while religions teach peace, people kill and exploit each other in the name of religion?

A one-line answer to this question: The term religion leads to a confusion between two things: 1) practices (action/verb), and 2) a category (entity/noun).

The notion of religion as a category evolved during European colonisation as the colonisers, who travelled by sea, captured more lands and peoples, who had different practices.

The term religion itself was adapted from one or more of the following Latin verbs: relegere, religare, or reeligere. Each of these three words referred to practices: they were all verbs and actions. Theses verbs were turned into nouns (nominalised) in the 19th century by European scholars and empire builders.

Turning actions into nouns is a common practice in English-based academia and is used to name and create categories. This process is an example of what language specialists call nominalisation.

Naming is a fundamental process of creating knowledge. By naming and defining something in a particular way, people’s perceptions and engagement with things can be shaped and/or changed. By introducing concepts and categories into a region where those categories were not used, the socio-semiotic eco-systems of the region are impacted. If this is done by using divisive categories, then one potential outcome of such interference is a division of communities and peoples.

Scholars of religion do not have a clear definition of what ‘religion’ really is (observe how this is similar to a biologist’s inability to define life, or a traditional linguist’s inability to define language). They, like many experts in other colonial-era disciplines, use structures and functions to contrast and describe religions (and life and language…). And, as in other colonial-era disciplines, these differences are used to develop genealogies, which form the basis of divisions (and exploitation). (See Regaining Balance: Rethinking knowledge making for more on this.)

Observe that most of our non-colonial languages did not have the concept of or a term for religion (as a noun). Today, many languages have translated or borrowed the category religion into their own languages. And, these translations and borrowings have led to confusions and problems in Indigenous knowledge and practices (which are now called religion).

Note that before the printing press and programs of mass literacy were created and adopted, people passed their practices to others verbally and through modelling. To help with this, these verbal teachings were often realised in poetic or story forms.

Teaching and learning through oracy are very different from learning from written texts. In oral cultures, teachers’ actions and what they teach have to be in alignment. If actions and teaching do not match, others in the community will observe a contradiction and not trust the source. For religion to transmit and spread orally, the message and the actions of the messenger must match. Religion in oral traditions is practice.

Relegere were practices:
Acts of sharing,
Of caring, of being human.

Along came the preachers,
Turning actions into things:
Naming divisions of oppression.

Actions lost; symbols take control:
Tokens of belief to be had
No matter how they are gotten.

Long gone are the practices,
That harmonized and healed:
Today, owning symbols is religion.

By compromising our ability to observe and verify a text or the producers of a product, we have to believe in and develop faith in the material provided as well as the people producing the material.

Observe how many people today believe their religious leaders without checking in to see whether these religious leaders practice what they preach. Check also if the claims they make are actually met i.e., the local populations are well and are living in harmony and prosperity. If your observations do not match the claims being made, then we need to investigate the causes for this and address the problems.

Oral languages vary and change across space and time and people. With religion being part of the oral traditions, the verbalisation of religions also varied across regions.

These variations in human practices are part of the natural harmony and can be observed across nature: trees, plants, animals vary across regions and co-evolve with time. Even the songs of the same birds vary across regions. Variations are natural, normal, and necessary.

With the rise of colonisation and the weaponization of:
a) the printing press,
b) schooling, which include religious seminaries, and
c) discipline of religious studies,
our dynamic and oral practices were turned into:
a) named entities,
b) written and static texts, and
c) sets of structural/functional descriptions and genealogical relationships.

And, as in linguistics and biology and other colonial-era disciplines, no concern was given to the interrelationships or co-occurrences of people who lived in harmony while having diverse beliefs.

The nominalisation of religion as a noun and as a category was and is an act of socio-semiotic violence that divides populations and lead to conflict.

As the economic systems of our lands were altered by the colonial masters, poverty and hunger started to set in. As the oppression of and aggression against the local populations grew, these new religion-based identities served to cluster people into groups. These groupings allowed new conflicts to arise – conflicts that did not exist before but continue to grow today.

To further enhance this violence and conflict, colonial agents destroyed (or attempted to destroy) local texts and written material. For example, they forced people across the Philippines to abandon their own syllabic scripts in favour of a Latin-based phonetic script (developed by linguists and anthropologists). In doing so, the Spanish broke the ability of the Indigenous people to learn from and maintain their own knowledge and practices. In time, people lost their own practices and adopted the ones sponsored by the Spaniards first and the Americans later. This is why a large proportion of the population in the Philippines is now Catholic or another Christian denomination (one can observe a similar occurrence across the Americas).

At the same time, colonial agents also wrote and sponsored the writing and publication of histories and books that showed Indigenous populations as always violent and in conflict. Promoting fake histories of violence serve at least two purposes: 1) it validates the colonial violence against others; and, 2) it opens up the possibility of the locals to engage in violence, which allows those in power to carry out further violence in response.

Observe how Indigenous communities were and, in some cases, are stereotyped as savage, wild, uncivilised, criminal, poor, lazy, and uneducated. These stereotypes create an othering of Indigenous people and discount their knowledge and understanding of the world. It ignores a need to study how Indigenous communities coexisted in harmony with nature and other humans. Note that this observation does not mean that Indigenous people did not have conflict. They did; however, conflict was localised, not massive, and not necessarily accompanied with or resolved through violence or oppression.

In time, the dynamic oral texts of our ancestors and the accompanying harmonising practices were lost. With a change in practice, the outcomes of the practice changed: harmony turned into conflict.

What remains with many people today are static religious texts which are mass produced and turned into prescriptive rules (observe how this is similar to linguistics, which names languages and produces grammar books that are used to prescribe).

The conflict sowed through the establishment of the category religion continues today and has on-gong socio-semiotic and material-biological consequences.

A reversal of this conflict and a regaining of balance and harmony is possible. All socio-semiotic systems are dynamic and can change.

To make the change, we need to relearn that religion is first and only a verb: an action, a practice. It is not a noun or an entity.

If our exploiters turned practice into a category in order to divide and subjugate us, then, we can reduce and end this exploitation by turning the category back into practice. We can un-nominalise religion and relearn relegere: practice.

Our rebuilding of practices of honesty, integrity, sharing, and self-respect will provide models that others can observe and learn from, especially children. Children learn by observing more than by words and books; therefore, by modelling and practicing relegere, we can influence their development and protect them from the traps of colonial exploitation and divisions.

I will conclude with a poem of hope; a metaphor of how we can learn to grow again. 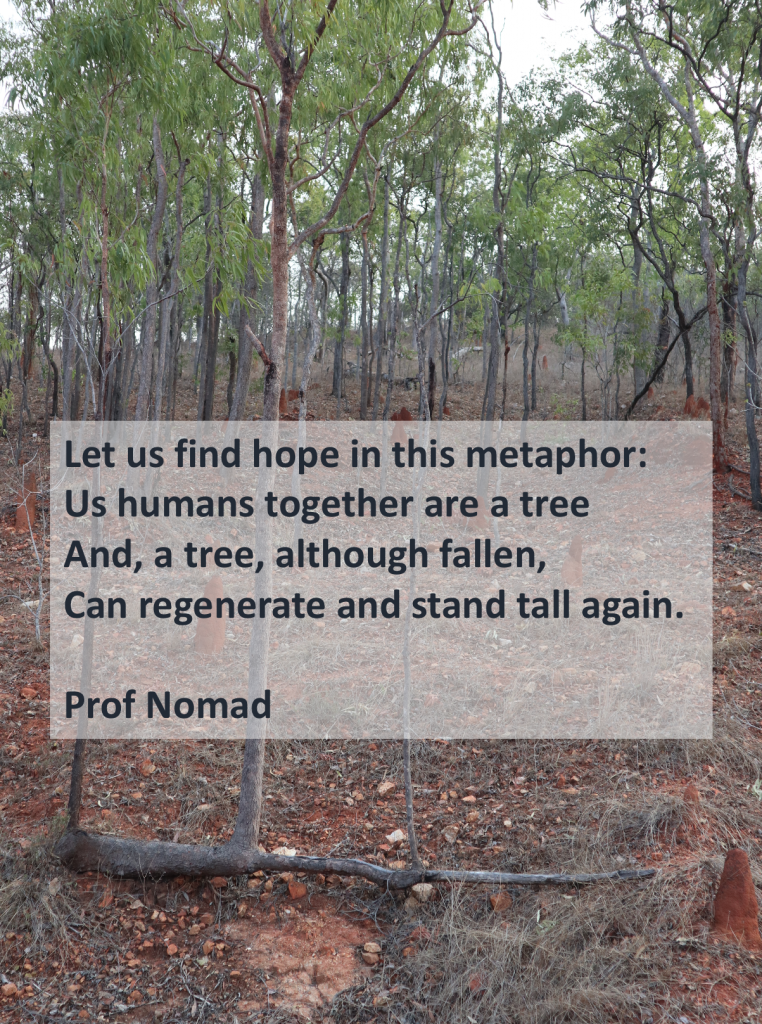 Prof Nomad (Ahmar Mahboob) is Associate Professor of Linguistics at the University of Sydney and Fellow of the National Talent Pool; President of Pakistan’s Programme for Highly Qualified Overseas Pakistanis.

The Revival of Polo in Drosh, Chitral