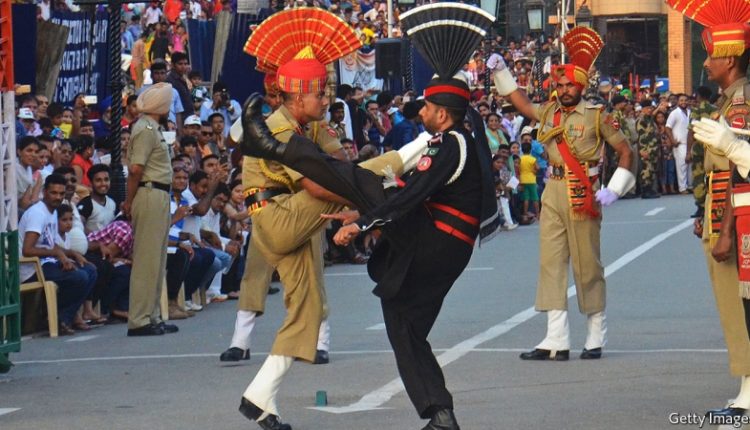 Even though many people in both India and Pakistan want peace, the threat of war always looms on them. And when I say war, I mean not only the war with other countries, but wars within the countries: wars fed by greed and corruption, which lead to disempowerment of many. Problems that are found in all countries, but much more in the so called “post-colonial” and “developing” world.

People in South Asia are aware that many of the fights that they are fighting today started after the British invasion of Mughal India. They are right. And, in colonising India, the colonisers not only used material weapons, but used socio-semiotic (including linguistic/language) ones too.

Socio-semiotics are ways in which all social species, including humans, make meanings, traditions, cultures, and practices. All social species have meaning-making systems; without them, they would not be social. Socio-semiotic weapons are those that disrupt, disable and destroy the socio-semiotics of the target population. For example, by using script as a weapon, the British created a divide between Urdu (which uses a Persio-Arabic script) and Hindi (which uses Devanagari script). This split led to a division between the Hindus and Muslims and Urdu and Hindi. And this conflict continues to disrupt our lives and keep us weak. To end this engineered hostility, we need to create and enable alternative socio-semiotics.

The socio-semiotics of the colonised and invaded worlds were severely damaged by their Masters. For example, in pre-colonial India, khwaja sira (rough translation: transgendered) were recognised as a third gender and had the right of property ownership, employment, and inheritance. The English did not recognise three genders and persecuted people of the third gender by outlawing them in 1860. The British beliefs (many of which are embedded in the grammar of the English language: will share an example below), or their socio-semiotics, over time, created a shift in how the local populations viewed khwaja sira. The change in status of khwaja sira was also marked in language by the emergence of new (derogatory) terms to refer to them, such as, ‘hijra’ and ‘chukka’.

This influence of British socio-semiotics and beliefs on the local populations, through a shift in laws, education, as well as language, is an example of how local socio-semiotics were disrupted, disabled, and destroyed. Over the recent years, South Asian countries have re-recognised people of the ‘third gender’; however, the social attitudes that were engineered by the British Raj continue to influence local socio-semiotic practices and khwaja sira continue to face social and economic discrimination.

Another example of how the socio-semiotics of English impacted local practices can be understood by looking at how the pronoun system of English operates. Of the three pronouns in English, two (‘he’ and ‘she’) refer to humans and one (‘it’) is used for all other things (including all living and non-living beings and things). The English grammar fails to mark a difference between living beings (other than humans) and non-living things in its grammar. For example, we often use ‘it’ to refer to anything non-human, including living things: dogs, fish, trees, plants…

If we use ‘he’ or ‘she’ for non-human beings or inanimate objects, it is marked – language experts call this personification. Personification is defined as:

“a figure of speech in which a thing – an idea or an animal – is given human attributes. The non-human objects are portrayed in such a way that we feel they have the ability to act like human beings. For example, when we say, “The sky weeps,” we are giving the sky the ability to cry, which is a human quality. Thus, we can say that the sky has been personified in the given sentence.”

The pronominal system of English reflects that English embeds a preference for humans (two pronouns, marking only two genders) over non-humans (one pronoun, and no marking of any gender). This has an impact on how people who develop their understandings of the world through English tend to assume that humans are superior to non-humans.

For example, many people today believe that the Aboriginal peoples of Australia were classified by the British as part of the local fauna and flora – not humans. Reports do not support this popular claim and point out that when this meaning was first projected, it was used as a metaphor – not a fact. The metaphor projected a meaning that Aboriginal peoples have been dehumanised. Regardless of its origin, this idea was/is interpreted as being a fact by many. And, today it continues to be used to show the disrespect and violence against Aboriginal peoples, whose children were taken away from them and their languages were barred. The taking away of the children, known as the Lost Generation, was a physical and social violence against the Indigenous peoples; and, the suppression of language was an act of semiotic violence.

It needs to be pointed that the socio-semiotic violence today is not only a result of the impact of English. For example, in Pakistan, the adoption of Urdu as the sole national language has also led to violence against its own citizens.

Urdu, as it has been standardised for education and official use, is based on dialects used by the elites and the urbans, not of minorities and non-urban dialects. For example, while “proper” Urdu prefers a single third person pronoun “aap” (you + respect), most other dialects make a two or a three way distinction in their third person pronouns. The use of pronouns is used as a marker of social class: “tu” (lower/working class), “tum” (middle class; marks solidarity), and “aap” (upper class). This use of pronouns to mark social class reflects an aristocratic social-semiotic practice, one which exploits minorities. We see the impact of this on the ways in which our communities are hierarchised by the use of Urdu as a social marker. To change this, we need to recognise all languages as national languages and to use “Pakistani” (the common language of the people, not ‘standard’ Urdu) as the lingua franca.

The policies, practices, laws, and violence of the British (and other colonising communities, including those within a country/region) negatively impacted the socio-semiotics of the local communities. The dehumanising experiences of the locals, where, for example, local populations (“natives”) were equated with dogs: “Dogs and Indians not allowed” impacted peoples’ self-esteem and self-respect and changed the ways that the locals thought, behaved, and acted.

The socio-semiotic weapons of the colonisers succeeded to severely damage and often destroy the local civilisations: local ways of being, knowing, and doing. They encouraged greed, sexism, ethnicism, and materialism, which were the driving forces behind colonisation, and endangered and destroyed local languages, cultures, economies and practices.

The socio-semiotics of our colonisers influenced how we began to think and act. People who learnt English were employed and promoted by the British, creating a belief that English is a necessity for “progressing”. The British encouraged the establishment of an Indian elite who were encouraged to be brown in colour and white in their ways of being, thinking, and acting i.e. they adopted the socio-semiotic practices of the colonisers. By doing so, they altered the socio-semiotics of the local communities. The British gave recognition to locals who learnt English and joint them in governing over other Indians; while, at the same time, making fun of the locals, specially the Indigenous and minority groups. They helped establish social attitudes and a social-class system that gave higher status to those who thought and acted like them; and poked fun and violence towards those who did not. And, as a final blow, when ending their direct rule of India, they transferred power to the elites of the country, who had been trained and educated by them. By doing so, they guaranteed that the socio-semiotic practices that they had set up would continue.

Many of our current wars – including wars against neighbours and wars against groups of people within the country – are one outcome of exploitative socio-semiotic practices.

If the British used socio-semiotic weapons to disharmonise and destroy us; we can also use applications of socio-semiotics to reinvent and strengthen ourselves.

If we want to celebrate our lives, families and communities – not greed, injustice, suppression, and war, then we need to draw on understandings of socio-semiotics in the development and application of our policies and practices.

And this can best be done by respecting and recognising diversities: by enabling groups and communities to develop economies in and through their own languages. English or another international, national, or regional language is fine as a lingua franca, but we need to urgently adopt using our own languages for building economies, knowledge, jobs, training, and education. And, I mean all languages. Not a select few.

Creating alternative socio-semiotics can allow us to bring prosperity to our societies and communities. And, to end the wars that disable us.

Prof Nomad (Ahmar Mahboob) is Associate Professor of Linguistics at the University of Sydney and Fellow of the National Talent Pool; President of Pakistan’s Programme for Highly Qualified Overseas Pakistanis.

More children around the world are being taught in English, often badly